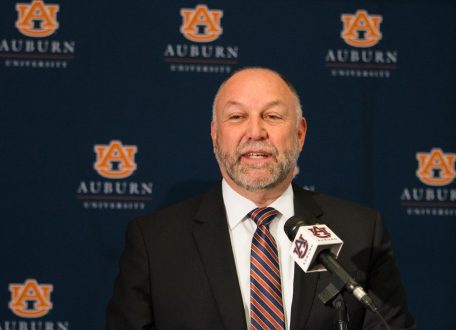 Over six months ago a search began to find a candidate that will replace Dr. Jay Gogue in July of 2017. The search is over and Dr. Steven Leath is ready to take root as the 19th president of Auburn University.

In September of 2016, students from all backgrounds had the opportunity to tell the search committee what they wanted to see in the next president. The 14-member board listened closely then began conducting an inclusive search to find the best candidate for Auburn.

On Monday, March 20, trustee Raymond Harbert, who lead the search committee said, “This is a great day for Auburn.” A historical day indeed, but what should current and future students be expecting from the leadership of Leath?

Students can prepare for plenty of interaction with Leath once he arrives in July. In his time at Iowa State University, he and his wife, Janet, regularly spent time with students during meals, sporting events and conducting leadership classes. Leath has even sacrificed time at late hours of the night to promote student safety downtown.

In an interview on Monday, Leath said, “Students come first, that’s really why we’re here. To prepare students to live a life.”

In his five-year stint at Iowa State, Leath has helped lower student debt, increase research expenditures and set fundraising records. Those achievements are incredible, but be careful not to compare what he has done in the past to what he can do for Auburn.

Leath’s biggest task will be taking Gogue’s work and fitting that with his vision for what Auburn needs. “Dr. Leath is incredibly lucky to inherit this success, and I believe he has the chance to make Auburn one of the top schools in the country,” said past Student Government Association President Jesse Westerhouse.

Westerhouse had the opportunity to serve on the presidential search committee as the student’s voice and took the job very seriously. “In working with Dr. Gogue over the past year, he has always been encouraging to get projects done that the students see as a priority. In my interactions with Dr. Leath, I see that same trait in him,” Westerhouse said.

Coming from those who know Leath the best, he is a leader who will go far and above the call to work for the betterment of Auburn. He will listen closely to the concerns of students, work with faculty and staff to improve research, funding and national recognition. He is excited to interact with alumni, learn about their time here and become a tireless champion for this university.

“When I leave here, if everybody knows Auburn and its accomplishments, I’ll be happy,” said Leath.